The prophetical teachings of Jesus in the Gospel of Matthew 24 *
could be named the "Small Revelation" ** : . 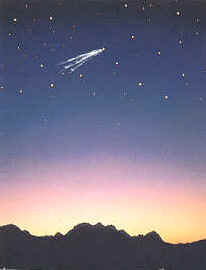 If one is seeking recognitions about the times to come, the Gospels and the Revelation are the most interesting source within the Bible.

The prophecy of the Old Testament often fits in the prechristian events immediately after the prophecy, named in the historical appendix of many Bible editions - for instance the Babylonian Captivity and the return from there, the later wars in the country and a victory of the Jews at that time; also about the Messiah or Christ. Only a few places additionally seem to indicate matters of our time or of the contents of the Revelation (for instance Jesaja 24; 25; 27; 66:15; Daniel 7:9-28).

Matthew 23:37 "Jerusalem, Jerusalem, who kills the prophets, and stones those who are sent to her! How often would I have gathered your children together, even as a hen gathers her chickens under her wings, and you would not! 23:38 Behold, your house is left to you desolate. 23:39 For I tell you, you will not see me from now on, until you say, 'Blessed is he who comes in the name of the Lord!'"
24:1 Jesus went out from the temple, and was going on his way. His disciples came to him to show him the buildings of the temple. 24:2 But he answered them, "Don't you see all of these things? Most assuredly I tell you, there will not be left here one stone on another, that will not be thrown down."

So far, Jesus must have predicted the destruction of Yerusalem by the Romans, which happened in the years 70 and 135 AD.
Later addition: in the meantime people like the Watchtower Society noticed this connection too; this is noted here without the usual negative comments about that group or sect, because they worked it out with many details, and the big churches were not very interested in these serious questions. But their theory, this whole message of Matthew 23 & 24 would refer to the old Romans, is false, because in the next passages Jesus announced tendencies and incidents, which may fit in our time :

24:3 As he sat on the Mount of Olives, the disciples came to him privately, saying, "Tell us, when will these things be? What is the sign of your coming, and of the end of the age?"

24:4 Jesus answered them, "Be careful that no one leads you astray. 24:5 For many will come in my name, saying, 'I am the Christ,' and will lead many astray. 24:6 You will hear of wars and rumors of wars. See that you aren't troubled, for all this must happen, but the end is not yet. 24:7 For nation will rise against nation, and kingdom against kingdom; and there will be famines, plagues, and earthquakes in various places. 24:8 But all these things are the beginning of birth pains. 24:9 Then they will deliver you up to oppression, and will kill you. You will be hated by all of the nations for my name's sake. 24:10 Then many will stumble, and will deliver up one another, and will hate one another. 24:11 Many false prophets will arise, and will lead many astray. 24:12 Because iniquity will be multiplied, the love of many will grow cold. 24:13 But he who endures to the end, the same will be saved. 24:14 This Good News of the Kingdom will be preached in the whole world for a testimony to all the nations, and then the end will come.

Tendencies like this occurred mainly since the last century in many countries.

24:15 "When, therefore, you see the abomination of desolation, which was spoken of through Daniel the prophet***, standing in the holy place (let the reader understand), 24:16 then let those who are in Judea flee to the mountains. 24:17 Let him who is on the housetop not go down to take out things that are in his house. 24:18 Let him who is in the field not return back to get his clothes. 24:19 But woe to those who are with child and to nursing mothers in those days! 24:20 Pray that your flight will not be in the winter, nor on a Sabbath, 24:21 for then there will be great oppression (/tribulation), such as has not been from the beginning of the world until now, no, nor ever will be. 24:22 Unless those days had been shortened, no flesh would have been saved. But for the sake of the chosen ones, those days will be shortened.

If it does not refer to the earthquake with the broken curtain in the temple after the Crucifixion:  the circumstances neither refer to the named destruction of Yerusalem by the Romans, nor did they occur clearly in the context of the foundation of the Islamic Mosque at Yerusalem. So it may refer to an unknown possible incident of the future, including a big earthquake (24:17).

24:23 "Then if any man tells you, 'Behold, here is the Christ,' or, 'There,' don't believe it. 24:24 For there will arise false christs, and false prophets, and they will show great signs and wonders, so as to lead astray, if possible, even the chosen ones. 24:25 "Behold, I have told you beforehand. 24:26 If therefore they tell you, 'Behold, he is in the wilderness,' don't go out; 'Behold, he is in the inner chambers,' don't believe it. 24:27 For as the lightning comes forth from the east, and is seen even to the west, so will be the coming of the Son of Man. 24:28 For wherever the carcass is, there will the vultures be gathered together. 24:29 But immediately after the oppression of those days, the sun will be darkened, the moon will not give its light, the stars will fall from the sky, and the powers of the heavens will be shaken; 24:30 and then the sign of the Son of Man will appear in the sky. Then all the tribes of the earth will mourn, and they will see the Son of Man coming on the clouds of the sky with power and great glory. 24:31 He will send out his angels with a great sound of a trumpet, and they will gather together his chosen ones from the four winds, from one end of the sky to the other.

Here Jesus did not use a parable. Even the "lightning" can be seen in that context as a direct comparison, and is not spoken figuratively. If one takes it seriously, Jesus speaks of the universal - not only human - nature of the changes and his Second Coming. Obviously this has not happened yet. The details of future may depend on of the behaviour of man, but the core of the prophecy is not prone to change. After that Jesus uses parables to explain the consequences of what he said before.

24:32 "Now from the fig tree learn this parable. When its branch has now become tender, and puts forth its leaves, you know that the summer is near. 24:33 Even so you also, when you see all these things, know that it is near, even at the doors. 24:34 Most assuredly I tell you, this generation (problematic translation; Luther translated in German "Geschlecht", meaning here "stock / lineage / generations / people/ culture") or will not pass away, until all these things are accomplished. 24:35 Heaven and earth will pass away, but my words will not pass away. 24:36 But no one knows of that day and hour, not even the angels of heaven, but my Father only."

24:45 "Who then is the faithful and wise servant, whom his lord has set over his household, to give them their food in due season? 24:46 Blessed is that servant whom his lord finds doing so when he comes. 24:47 Most assuredly I tell you that he will set him over all that he has. 24:48 But if that evil servant should say in his heart, 'My lord is delaying his coming,' 24:49 and begins to beat his fellow servants, and eat and drink with the drunken, 24:50 the lord of that servant will come in a day when he doesn't expect it, and in an hour when he doesn't know it, 24:51 and will cut him in pieces, and appoint his portion with the hypocrites; there is where the weeping and grinding of teeth will be.

25:1 "Then the Kingdom of Heaven will be like ten virgins, who took their lamps, and went out to meet the bridegroom. 25:2 Five of them were foolish, and five were wise. 25:3 Those who were foolish, when they took their lamps, took no oil with them, 25:4 but the wise took oil in their vessels with their lamps. 25:5 Now while the bridegroom delayed, they all slumbered and slept. 25:6 But at midnight there was a cry, 'Behold! The bridegroom is coming! Come out to meet him!' 25:7 Then all those virgins arose, and trimmed their lamps. 25:8 The foolish said to the wise, 'Give us some of your oil, for our lamps are going out.' 25:9 But the wise answered, saying, 'What if there isn't enough for us and you? You go rather to those who sell, and buy for yourselves.' 25:10 While they went away to buy, the bridegroom came, and those who were ready went in with him to the marriage feast, and the door was shut. 25:11 Afterward the other virgins also came, saying, 'Lord, Lord, open to us.' 25:12 But he answered, 'Most assuredly I tell you, I don't know you.' 25:13 Watch therefore, for you don't know the day nor the hour in which the Son of Man is coming.

25:31 "But when the Son of Man comes in his glory, and all the holy angels with him, then he will sit on the throne of his glory. 25:32 Before him all the nations will be gathered, and he will separate them one from another, as a shepherd separates the sheep from the goats. 25:33 He will set the sheep on his right hand, but the goats on the left. 25:34 Then the King will tell those on his right hand, 'Come, blessed of my Father, inherit the Kingdom prepared for you from the foundation of the world; 25:35 for I was hungry, and you gave me food to eat; I was thirsty, and you gave me drink; I was a stranger, and you took me in; 25:36 naked, and you clothed me; I was sick, and you visited me; I was in prison, and you came to me.'

** Its central message is similar to the more comprehensive Revelation of St. John